Guide to Betting NBA Over – Unders 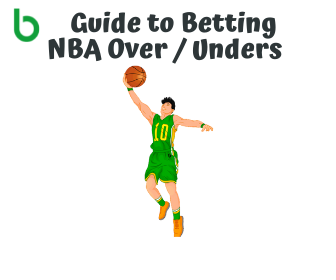 Welcome to the BParlay.com guide to Betting NBA Over/Unders

NBA betting is similar to the other major sports, with three primary ways to bet on a game: point spreads, moneyline and totals.

Totals are a way to bet on the total number of points scored between the two teams. The number varies based on the teams on the floor, with a typical range coming between 205-240 points.

What are NBA Totals?

NBA totals are a bet on the number of points scored in the game. A line is set based on the teams, and you can either bet the over or under.

What Determines the Line for Total Points?

As with any sport, the quality of the two teams is everything when determining lines for points or spreads. When looking at total points, there are a few key factors at play: offensive performance, defensive quality, recent performance, and how teams’ strengths and weaknesses align.

When looking at NBA offenses, the metrics that tend to stick out are points per game, field goal percentage, and efficiency, along with the pace of play.

Together, you can get an accurate look at how offenses operate, which are scoring more and making the most of their opportunities.

Pace also allows a better look into how many times teams are shooting the ball in a game. The faster they shoot, the more likely they’ll score more points in the game.

Just as you study offenses, the quality of defenses can be even more important to a total points bet. Defenses that allow more points and are more inefficient are solid targets when betting an over.

On the flip side, strong defenses that excel at stopping teams in multiple ways can make for a good under bet. We recommend reviewing the official NBA Player statistics in order to stay fully updated on performance of the players and teams.

NBA is very much a momentum sport. With so many games, teams usually play four times a week. A few players sometimes get hot from the field, pouring on more points than normal.

Keeping tabs on betting trends is very important when picking your bets for that night. Some team may have introduced a new lineup that is leading to more points, and they have hit their overs in five straight games.

Or, teams struggle to score after an injury to their best player, and the under suddenly becomes the more attractive option.

You can break down NBA stats at a deeper level than just points per game and field goal percentage.

Teams have tendencies on both ends. For example, some teams shoot the three really well but can’t score in the paint.

Some defenses are very good at stopping the three-point shot but can’t slow down scoring inside.

Finding these tendencies and then advantageous overlaps are the key to betting total points.

What to Look For When Betting NBA Totals

Everything above factors into targeting NBA totals with your betting picks. If you want to bet an over, it’s best to find teams that each have strong offenses and weak defenses.

It helps if each team plays at a fast pace and if their offensive strength aligns with the opposing team’s defensive vulnerability. It is alsoworth looking at some of the BParlay NBA totals strategies that are available for our readers.

The same logic applies when targeting unders, but the inverse. Ideally, you’re finding two teams that have elite defenses and struggling offenses.

A perfect example of finding overlaps in offensive tendencies occurred in Round 1 of the NBA playoffs in 2021. The Memphis Grizzlies were the number one team in the NBA at scoring points in the paint, going against the Utah Jazz, who were one of the most generous defenses to inside scoring.

The Jazz offense was tops in the league at shooting the three while the Grizzlies struggled to stop the three.

With advantages for both offenses, the over became the best bet to target. As a result, the Round 1 series went five games, with the over-hitting every time. That’s the guide to Betting NBA completed for now, come back soon for more updates.