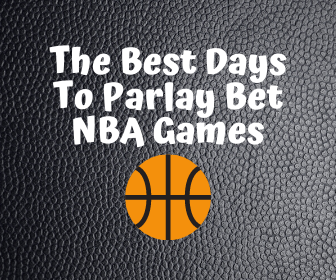 The NBA is great to Parlay bet as there are so many games each day and this is constant throughout the NBA season.

In other sports such as football or soccer, you have to wait (sometimes) up to a week before you can get another bulk of games to parlay.

Even though there are games pretty much every day throughout the NBA season, there are days that have more games than others allowing us to pick a nice big parlay or give us more options to choose better games for our bet.

When does the NBA Season Begin?

You can see specific dates via the NBA.com/Key Dates page.

When does the NBA Season Finish?

The regular NBA season ends around mid-April making way for the playoffs to begin.

The playoffs start with the Conference Semifinals and these will usually last just over a week. Once the teams have all advanced to the Conference Finals stage they can commence which is usually around Mid-May.

The NBA Finals will then host the two remaining teams and this will begin around Mid-June.

How are the NBA Playoff teams decided?

All NBA Basketball teams are split into two leagues, The Western Conference and the Eastern Conference. The top eight teams from both of these leagues will qualify for the playoffs, so this gives us 16 teams in the NBA playoffs.

Each team will be seeded based on their season record and will be placed against a team from their Conference using the following format.

Each series throughout the playoffs will be decided on the best of seven games. The winning team (with the better record from their Conference games) will host the first, second, fifth and seventh games in each series whilst the lower-seeded teams will play the third, fourth and sixth games of the seven.

How can check which dates show the most NBA Games?

You can use NBA.com free website to see how many games are played each day. Click on the NBA.com link which will take you to a page listing all NBA games.

When you are on this page you can select individual dates just below the top menu and to the right side of this you will see the link ‘Calendar’. If you click on this it provides a pop up showing the number of games due to be played on each calendar day.

The image above shows an example of February 2020 and show us how many games we can parlay on each day.

How many NBA games make up a good Parlay

In previous articles, we have stated that you should try to make a parlay bet of no more than 3-4 bets if you want a good chance of winning. This won’t give you as much profit as if you were to pick 6 teams in a parlay (the chance of winning does reduce with each extra bet you add though).

On the image above if you chose Thursday, Feb 13th you can win a parlay by betting on both games when there are only two games to choose from. There are limited options which means we may have to look into the props a bit more and see if the over/under or totals will provide us a better chance of winning.

On Wednesday, Feb 12th there are 11 games to choose from. This allows us to be a bit more picky with our games and can really narrow down what we think is a good bet to add to our parlay bet.

To read our previous article Winning Parlay Strategy click the link provided. This gives you tips on how to select your winning parlay.