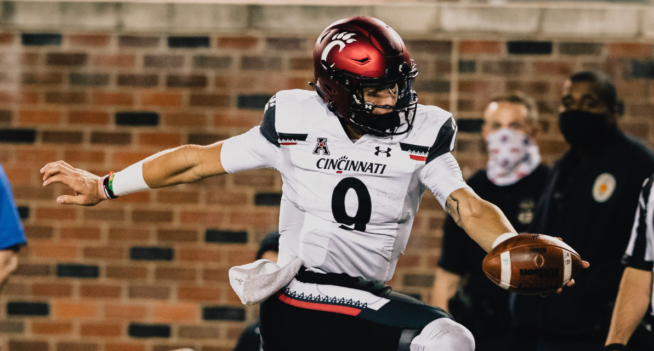 Welcome to the BParlay NCAAF Betting Guide for 2021.

The American Athletic Conference (AAC) has not always been known as a league with strong football teams, but that is no longer the case. The past decade has seen the AAC produce some teams that were knocking on the door for a College Football Playoff appearance.

The 2020 season was another strong year for the league, and the AAC was able to get a number of games in despite the threat of COVID-19. There are four terrific teams set to take the field this season in the AAC, but this is also a conference that has some depth.

There is one clear betting favorite at this time, and the AAC could actually have a team that is finally able to reach the CFP as a top-four team. Here is a look at the projected win totals for the teams in the AAC and also a breakdown of how the 2021 season might go.

The Cincinnati Bearcats were one of the biggest stories of the college football season in 2021, but they are not going to be a surprise this season. Cincinnati has a team that is absolutely loaded with talent, and they will spend the entire season inside of the Top 25.

Why not check out the latest American Athletic Conference league standings for 2021.

Quarterback Desmond Ridder is arguably the best player in the AAC, and he should put up some monster offensive stats this season. The Bearcats blew out conference opponents a season ago, and it’s hard to imagine them not repeating that again in 2021.

Cincinnati is clearly the favorite to win the AAC, but they will still have to have to show up to play. The Bearcats will be tested and ready for conference action as they face a pretty daunting non-conference schedule.

Cincinnati will take on both Indiana and Notre Dame this season, and they are going to be underdogs in those matchups. That means that the Bearcats will need to run the table in the AAC if they are going to get to 10 wins.

It’s never easy to go through league play in any conference without taking a loss, but Cincinnati has the type of team that can pull it off.

If any team is going to find a way to upset Cincinnati in the AAC, then it will likely be the UCF Knights. It wasn’t long ago that this program was making a run at the College Football Playoff, and this should be another great season for the Knights.

Quarterback Dillon Gabriel is every bit as talented as Ridder, and the Knights should also feature an offensive attack that is tough to stop. UCF has a pair of running backs that can also put up some big numbers, and this team wants to play extremely fast.

UCF will face Boise State and Louisville as the two biggest challenges in the non-conference, and they are also on the road at Cincinnati. The Knights shouldn’t have much trouble with the rest of the teams in the AAC, but this team could easily have three losses.

There are still some question marks on defense, and it might take some time to figure out those issues. Those defensive concerns are going to haunt the Knights in a few games, and getting to 10 wins just doesn’t seem likely for UCF in 2021.

Memphis enters the 2021 season with a quarterback battle taking place this preseason, and that will need to get sorted out. Brady White was terrific under center for the Tigers, but quarterback play could be a concern this year.

The defense of Memphis could be asked to carry the load for much of the season, and that unit will be returning nine starters. The Tigers did struggle to slow down some of the top teams in the AAC last season, and that could be a cause for concern this year as well.

Memphis could go 3-1 in non-conference play as Mississippi State looks to be the biggest challenge. That will allow the Tigers to gain some confidence before AAC action starts, and Memphis should be good enough to beat the lower-level teams. Ths team knowledge just had to be added to our NCAAF betting guide.

Memphis won’t be good enough to win the conference, but the Tigers can get to eight wins.

Houston is a team that is not getting a ton of respect in terms of competing for an AAC title, but the Cougars should be absolutely loaded in 2021. The defense has nine starters returning, and Houston went out and reloaded the offense through the transfer portal.

Quarterback Clayton Tune was impressive a season ago for the Cougars, and he will have plenty of weapons to throw the ball to. Houston was a team that was inconsistent on offense a year ago, but another year of experience should help.

The Cougars are going to win at least three non-conference games, and they will have a shot at beating Texas Tech as well. Houston might not be good enough to beat UCF and Cincinnati, but they will compete.

With an easy non-conference schedule, the Cougars should be able to get to nine wins at least.

Tulane currently has a win total set at just 5 games, even though the Green Wave have won at least six games in each of the last three seasons. The Green Wave are not going to be strong enough to contend for a division or conference title, but another bowl game could be in play.

The other three teams in the AAC are Army, South Florida, and Temple, and those three teams are going to be at the bottom of the league. Those teams could get to their regular-season win total, but they will need to rack up some wins in the non-conference.

When it comes to betting on which team is going to win the AAC, there is one clear favorite, and the rest are well behind. The Cincinnati Bearcats are the favorites at -1050 to win the AAC, and that means that sportsbooks are pretty sure that they will accomplish this.

Upsets do happen in the sport of college football, and this league has seen a number of upsets in recent years. There is a group of at least three teams that could challenge the Bearcats, but more could emerge as well.

UCF is next on the list at +100, and the AAC was once a conference that was dominated by the Knights. Houston (+250) and Memphis (+390) are the next two teams on the list, and each could have what it takes to knock off Cincinnati.

Cincinnati currently has odds set at +15000 to win the National Championship this season, and that is actually pretty good odds for an AAC team. The Bearcats will be eliminated from contention with just one loss, but those odds will continue to shorten with every win.